Home | The sites of the battle | Gandoet Ravine 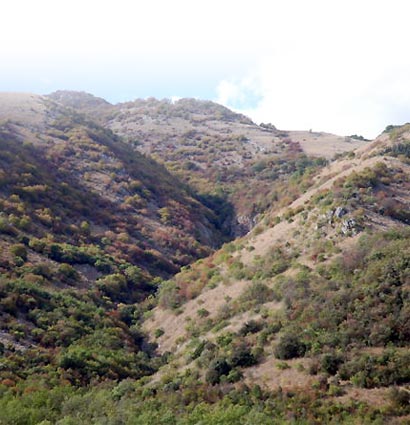 The Gandoet Ravine is the name given to a chimney in a sheer cliff, whose sides provided protection against artillery fire from Cifalco.

According to Marshal Juin, this passage which led to Belvedere was identified by Lieutenant Jordy on 24 January 1944, i.e. the day before the fighting began. Major Gandoet reported the discovery to Colonel Roux and they decided to name it, for the needs of identification and communication among the soldiers themselves, the “Gandoet Ravine“. This name, which was used by the members of the 4th R.T.T., has gone down in history.

Even though he had considerable experience of mountains, Colonel Roux had reservations about Gandoet’s wish to have the 11th Company climb the ravine, given the enormous load carried by the men. Nevertheless, Gandoet insisted on sending his men up the steep, narrow passage.

The authors of this website visited the sites of the battle in October 2007. We can confirm that the Gandoet Ravine really is very difficult to negotiate. It takes at least five hours to get to the top. There are no paths and the ascent is a climb rather than a walk. Only individuals in very good physical condition can even think of doing it. Accompanied by children, we had to abandon our ambition to walk in the steps of the 11th Company.

However, Captain Cavallero, an Italian officer and expert in military strategy, climbed the ravine for the purposes of his own research in November 2006. This particularly difficult journey shows that the climb by the men of the 11th Company in unknown, snow-covered terrain, in the freezing cold (carrying a “barely believable” kit, according to Major Gandoet himself) on 25 January 1944, was a real feat.

This is General Chambe’s description of the Gandoet Ravine in “Le Bataillon du Belvedere”:

A kind of oblique corridor, like a gash in the mountain made by a giant’s sabre, rises up to the sky. The sides, only a few metres high are so steep, so nearly vertical, that they seem, on closer examination, to be impassable, their menacing edges crowned with bushes and brambles;

The gorge is so steep it makes you shiver. At its foot, you have to tip back your head to follow the vanishing point which fades into infinity in the mist. Wide enough at the beginning, the bottom quickly shrinks until it is only one or two paces wide. To make matters worse, it is strewn with rocks, some of them enormous, carried there over thousands of years by erosion and melting snow. Getting across them requires Alpine acrobatics.

Were we really going up there? … If it was only a short distance [it would have been OK]. But we were at hill 60 and the summit to be taken by force, the battalion’s objective, was at 862 metres. Eight hundred metres to climb, using our feet, hands, knees and teeth, with all our weapons, FMs, machine guns, mortars, shells, haversacks full of grenades, cartridge pouches, cans, tent canvas on chains – the whole enormous load to be carried by the men. We had nearly three times the height of the Eiffel Tower to climb, metre by metre. With no steps, no handrail, and no assistance.