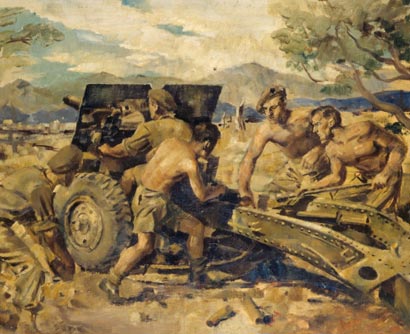 General Juin was informed around 3.30 a.m. that the whole of the Belvedere massif was in French hands, including Casale Abate.

This meant that along the French section of the front, the Gustav Line had been breached. Meanwhile, the American II Corps was stalled in front of Cassino. Unfortunately, the C.E.F. did not have enough troops to keep the breach open. The 2nd D.I.M. was on Monte Carella and Monte Santa Croce, and there was no question of withdrawing them from these positions. Clark – visibly surprised by the breach made by the 4th R.T.T. – promised to send the 142nd American Infantry Regiment in support. These troops took three days to arrive in support of the French, and so it was not possible to exploit the breach in the Gustav Line achieved by the 4th R.T.T.

Once again, the men were soaked with icy drizzle at dawn on 27 January 1944. It was clear to the men and their officers that if the positions they had taken were not supported by American troops the Germans would be able to organise a counter-attack.

In addition, living without food or water was becoming unbearable for the men. Between the peaks of Casale Abate and the peaks of the Belvedere, the land formed a basin with a watering place, which had been identified by Lieutenant Jordy on the aerial photos before the fighting began. The battalion commanders forbad their men from going there, given the danger. Some however were unable to resist, as their thirst overcame their fear. The Germans knew about the place and waited for the thirsty riflemen in order to shoot them. And so a ring of dead bodies came to surround the source. One rifleman managed to bring back a can of water for his comrades. It was muddy but nobody cared.

To no one’s surprise, the Germans launched a counter-attack at 8.30 a.m. At 10.00 a.m. the attack was amplified and became massive. The Germans far outnumbered the French, with a ratio of three to one. This counter-attack was concentrated in two places: the valley of the Rio Secco, in order to isolate the 4th R.T.T. in the mountains; and the summits taken by the French.

On Casale Abate the sacrifice of the men from the 2nd Battalion, who were encircled and attacked on all sides was irreversible. Léoni had only a hundred or so men who were still able to fight. The order was given to hold the ground at all costs, and the annihilation of the 2nd Battalion began.

The riflemen fought courageously to their last breath. Léoni cried: “Now we are fighting for our honour!” before his jaw was smashed by a bullet. He continued to lead the battalion although he could no longer speak.

Excerpt from a letter from 2nd Lieutenant Clément:

The most beautiful memory I have of him is this: when he was wounded in the face and no longer able to speak, he used his cane to point out a machine gun that had to be manned after the death of his gunners, while the enemy was advancing only a few metres away. His look alone sustained all those at his side. He was a leader under whose orders I am proud to have served.

By now there were only 70 survivors who fell back little by little towards the summit of hill 950.

The earth was covered with dead and wounded. Three quarters of the officers were no longer able to fight, all the company commanders were killed along with most of the section chiefs. Berne, hit by three bullets, managed to find refuge in a shepherds’ hut. He had the satisfaction of having rejoined his battalion, although seriously wounded. He was taken prisoner.

The enemy found only disarmed opponents. The 4th R.T.T. had run out of ammunition. They had gone beyond the limits of courage and willingness. The men of the 115th Panzer Grenadier Regiment realised this. They raised their weapons.

An officer advanced. There was no hatred in his expression, only admiration. He did not speak French:

Captain Trinquet dropped the last clod of earth that he was preparing, derisively, to throw into the faces of the assailants. On 27 January at 11.30 a.m. the 2nd Battalion was at the height of its ordeal. 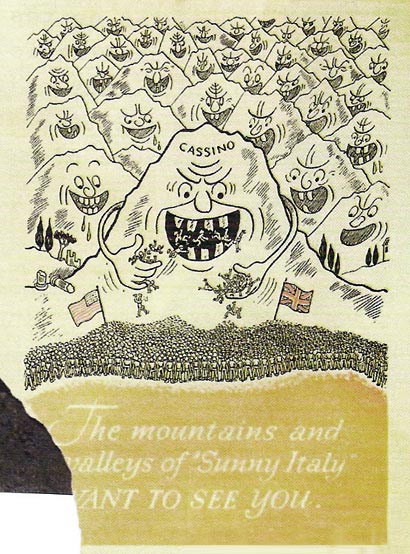 In the valley, the 3rd R.T.A. (Colonel de Linares) had not been able to set up a barrage above Olivella in time.

The Germans had therefore invested in that part of the valley. The 4th R.T.T. was now isolated on the peaks of the Belvedere. The riflemen had not eaten, drunk or slept for three days.

With respect to the 3rd Battalion, the Germans were beginning to skirt around hill 862. Gandoet had received the order from Colonel Roux to hold hill 862 at any price. He passed on the order to Jordy. The 10th Company (Louisot) and the 2nd Company (Billard) would protect the sides of hill 862.

Gandoet sent a liaison officer to Bacqué with the following message:

Midday, situation very serious. Massive counter-attack everywhere. Infiltrations. We need another battalion in support. The 2nd Battalion has been wiped out.

Bacqué and Gandoet took the measures necessary to preserve the O1 of the 2nd and 3rd Battalions (hill 721 and hill 681) and hill 382.

The Germans had also entered the Gandoet Ravine. Bacqué moved on hill 382. Gandoet envisaged withdrawing 11th Company from 681 in spite of the orders given by Monsabert and Roux to hold on. There was a serious lack of ammunition. The mules had still not arrived in spite of the repeated demands of the battalion commanders.

The order was given to search the dead and wounded to remove their last ammunition. To only shoot to kill, cartridge by cartridge and in any event, to clear the way with a bayonet! All the German weapons and ammunition taken were recovered and distributed.

At the end of the morning the German counter-attacked was concentrated on the 11th Company.

Excerpt from the notebook of Captain Aygadoux:

2 sections of the 2nd company are sent to the right of Jordy (company led by Billard).

The German attack then turned on Jordy. Mortars, artillery. On 681, I was unbelievably spattered by exploding mortars. Dead and wounded everywhere. Impossible to remove them. We couldn’t raise our heads. Our artillery was silent.

Shelling appalling. Jerry arriving on all sides. Saw German blockhouse 300 metres below us and about 50 Germans turning towards us by the Rio Secco towards the south.

At midday, Captain Aygadoux picked up an SOS from Jordy:

I can’t go on anymore, I can’t hold out, we’re almost totally surrounded, out of ammunition.

In order to avoid the destruction of his battalion, Gandoet ordered Jordy to withdraw from 862 towards 681 at 12.40 p.m. The same order was given to the 2nd Company and to elements of the 10th Company. Captain Louisot was wounded by an exploding mine. Jordy’s men brought back nine prisoners.

Lieutenant Jordy arrived last in tears. His heart was gripped with anger. He was crushed by fatigue and at the edge of despair, so difficult was it for him to abandon the objective that had cost his company so much. His men were so proud to have taken the summit, which appeared to be impregnable from below, but which they had taken nevertheless, thanks to their reckless bravery. To be obliged to give it up now, after all that!

Jordy threw himself, rather than lay, on the ground, beside Major Gandoet. Bullets were whining and ricocheting around them. He took no notice. A grimace twisted his lips.

It’s over Major, he said sarcastically. Everything’s here, everybody, all the equipment. There’s nothing left on 862. It’s a nice piece of work!

— Don’t be upset, lad! You did your duty. You fought like a lion. It’s only for a short while. We’ll soon be up there again …

Inch’Allah ! Especially if we have to pay so much again!

Major Gandoet ordered Captain Aygadoux to set up a stongpoint on hill 681 and take command of it.

The Germans were infiltrating hill 862 and were 300 metres from hill 681. Jordy asked for a burst of fire on the southern slopes of hill 862 which stopped the infiltrations.

The men are knackered. They’ve had nothing to eat or drink since the beginning. No more ammunition. Very heavy losses. 11th Company had 185 men and is now down to 35. The Germans did not want or were not able to push the attack any further.

The artillery fire on the summits they had just taken and the barrage of fire before 681 must mean something.

We have calmed down. 11th Company has fallen back into place. I am still commanding the advance post. Jordy is too tired and the Major wants him to rest. The night will not bring rest.

The enemy is at 200 metres to our left and holds the peaks at 400 metres in front of us. Rounds. The men are exhausted. The human machine has its limits.

Bonjour’s tanks deployed at the same time in the valley and advanced in the direction of Olivella in the Belmonte corridors.

It was a success: a first assault was made and Major Spangenberger took more than one hundred German prisoners.

The 3rd R.T.A. was charged with retaking hill 470. While the 7th R.T.A. was reinforcing the 1st Battalion.

Colonel Roux gave his orders: to hold on whatever the cost, whatever the consequences. He then took the decision to join the men on the Belvedere, accompanied by Captain Galtier and 2nd Lieutenant Guillaumeau. Having left in a jeep around 9.00 a.m., they were stopped by a detachment of Germans and all three were taken prisoner before Olivella.

Colonel Roux immediately informed Galtier and Guillaumeau of his intention to escape in view of the confusion surrounding the fighting, particularly the Bonjour group’s planned attack.

Around 1.30 p.m., seeing the French tanks approach, Roux ordered the Germans who had taken him prisoner to give themselves up. He jumped on a German and took his rifle. Freeing themselves, the French fled towards a house. It was at this moment that Colonel Roux was killed by a bullet or piece of shrapnel. The 4th R.T.T. no longer had a commanding officer.

The news of his death spread through the 4th R.T.T.

2nd Lieutenant Clément, who had been wounded, managed to escape from Casale Abate, as did Lieutenant Gaudin, who had “played dead” to escape the Germans.

After these three days of fighting, the 4th R.T.T. had already suffered very heavy losses. The 1st Battalion had lost one quarter of its men. The 2nd Battalion was almost completely wiped out, with the notable exception of the 7th Company (Tixier) which was still in occupation of hill 700. The 3rd Battalion had lost one third of its men. The 11th Company, out of a total of 185 men, now had only 35 survivors.