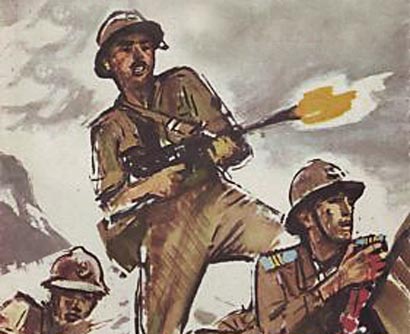 Holding the bridgehead at Belvedere is crucial. Keep the positions taken at any price. Take back hills 700, 862 and 915.

Eleven mules finally arrived at hill 382, which was held by Bacqué, at dawn on 29 January.

The 4th R.T.T. received reinforcements: a detachment from Colonel de Linares’ 3rd R.T.A., under the orders of the Cadet Hamonet. Having left with 50 men, they were down to 13, but with 30 prisoners including a captain. A second detachment from the 3rd R.T.A. arrived later.

7th Company and 3rd Company attacked hill 771. They suffered heavy losses. The battle raged all day. Monsabert then sent the 11th Company of the 7th R.T.A. to further reinforce the action of the 1st Battalion. The American 142nd Infantry Regiment pursued by Clark had still not arrived to reinforce the French. At that moment they were fighting before Cassino.

Monsabert ordered Bacqué to resume the offensive even though the men were exhausted. Bacqué, out of consideration for his men, asked for time to prepare the counter-attack. Monsabert refused and confirmed the oral order with a written instruction to Bacqué.

Meanwhile the 3rd Battalion was confronted by four German machine guns from hill 681 to hill 862.

Gandoet therefore sent 11th Company to retake hill 862, especially as Jordy was furious at having had to withdraw.

It was Staff Sergeant Le Greves who was tasked with taking out the four blockhouses with twelve volunteers. He was assisted by an extraordinary marksman, Warrant Officer Reichenbach, whose skills made him a force of nature. Lieutenant Gauthier was to take the pass between hill 681 and hill 862.

At 10.00 a.m. the objectives had almost been achieved. The south east slopes of hill 862 were under French control. The artillery was pounding the western slopes of hill 862 to prevent the Germans from counter-attacking. The sections led by Gauthier and Couchin were launched followed by the Huguenin section.

Captain Aygadoux was killed in the middle of the day in hand to hand fighting. Jordy was the only company commander unscathed. He organised the occupation of hill 862 for the second time.

The German counter-attacks multiplied during the day. Captain Gauthier of the 3rd R.T.A. was killed.

At the end of the day on the 29th, Gandoet called for Jordy asking him to act as his deputy and be ready to take over if he was no longer able to lead.

Jordy, it seems, objected to this decision as it took him away from his men. His deputy, 2nd Lieutenant Gauzan, replaced him at the head of 11th Company. He occupied the strongpoint on the southern slopes of hill 862.

A convoy of 26 mules led by Warrant Officer Dick arrived with food and ammunition at the foot of hill 721 at 7.00 p.m. The 3rd Battalion was reinforced by a company from the 3rd R.T.A. (company led by Captain Le Dorée) and 70 men under the orders of Lieutenant Spiroux.

The French gradually consolidated their position on the slopes of hill 862. Hill 771 was retaken in the evening, but the Germans counter-attacked almost immediately. Once again the men had to fight with their bayonets. The Germans now had fresh troops including the 95th G.R.D.

Bacqué withdrew. He personally collected the shells to take them to the battalion.

The 9th Company relieved what was left of the 11th Company and attacked hill 862. A fresh convoy of food and ammunition arrived.

The 1st Battalion of the 7th R.T.A. renewed the attack on hills 700, 771 and Casale Abate. Captain Carré was killed by a burst of gunfire at point-blank range along with his 2nd in command, Lieutenant Bartoli.

Captain Tixier, the officer in command of the 7th Company, was seriously injured. The rumour went around the regiment that he had suffered a terrible wound. The tragic circumstance of his death are told in the section “Leading figures in the Battle of Belvedere” on this site.

The 7th R.T.A. attacked hill 915. Lieutenant Spiroux took command of hill 862 and received the order to hold on at all costs. They made a number of bayonet charges.

The French consolidated their positions little by little. 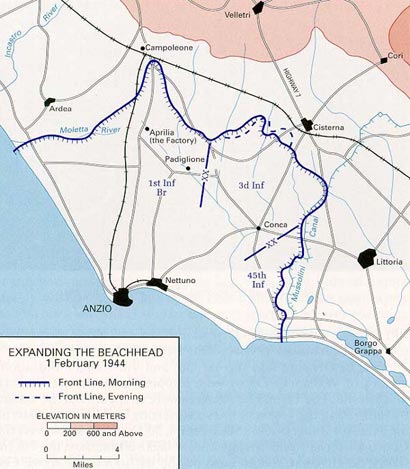 The French launched their assault at dawn. The western spur of hill 862, hill 771 and hill 700 were retaken.

The Belvedere and Casale Abate were back in the hands of the 4th R.T.T. with the help of the 3rd and 7th R.T.A. The Semichi section arrived as a reinforcement on hill 862.

The 3rd R.T.A. found riflemen from the 2nd Battalion still alive at the summit of hill 915. Wounded, sometimes very seriously, they had had nothing to eat or drink for four days.

February 2 and 3 were days of consolidation for the French position.

The fighting certainly continued and the Germans attempted several counter-attacks, particularly on 2 February at 4.00 p.m. on hill 862, without success, and another on 3 February on hill 915, also without success. Little by little the Germans gave up the idea of retaking the positions now occupied by the French.

All the objectives had been achieved.

The 4th R.T.T. had paid a very heavy price. The fighting for the peaks of the Belvedere massif had been fierce:

The statistics of the dead, wounded and missing are included in the section “The 4th R.T.T.” on this site.