Joseph de Goislard de Monsabert was born on 30 September 1887 at Libourne. He was admitted to Saint-Cyr in 1907. He did his recruit training in the 50th Infantry Regiment of Périgueux, then entered the military academy in 1908.

He was a member of the Moroccan class. A volunteer for the African Army, he nevertheless had to leave Morocco and the 3rd Rifle Regiment to join the fighting in the First World War, where he won renown. He was posted first to the 1st Mixed Regiment of Zouaves (Infantrymen) and Riflemen, then to the 9th Regiment of Zouave Foot Soldiers which he later had the honour of commanding. 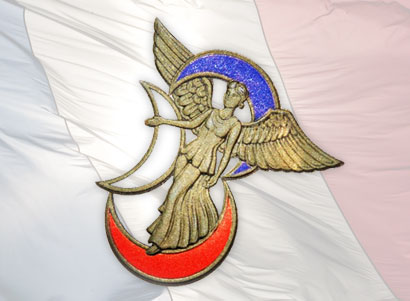 In 1943 he was given command of the Algerian 3rd Infantry Division (3rd D.I.A.) with the task of preparing and training it for active service. He took part in the Tunisian campaign and drove the Germans back to Bizerte. He then conducted the Italian campaign alongside General Juin.

General de Monsabert led the military action at Belvedere from his H.Q.

A General with a virtually unblemished career in 1944 (he was nicknamed the “Gascon gentleman“), Monsabert knew that the attack on the Belvedere ordered by Clark would cause heavy losses among the soldiers of the 4th R.T.T.. He did not oppose it and gave the order to attack the German positions on 25 January 1944. He was later criticised by his detractors for a lack of care in deploying his troops. It seems however that Monsabert did not hesitate to expose himself to danger close to the front line and that this reproach was not justified.

He later took part in the Provence landings, the re-conquest of Toulon and Marseille, and the defence of Strasbourg. Appointed to the command of the Army II Corps, he crossed the Rhine and took Stuttgart. He became the first Commander-in-Chief of occupying French troops in Germany.

On 30 September 1946, General Goislard de Monsabert retired. In 1951 he was elected to represent the Landes region of south-west France in Parliament. He died on 13 June 1981.