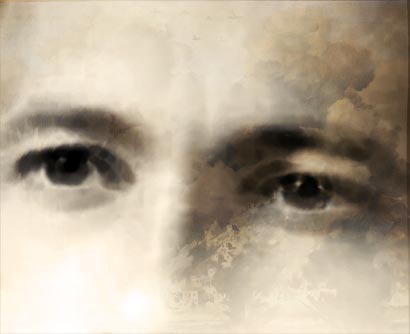 The 4 February 1944 was the day of the relief of the 4th R.T.T. It was, however, a dramatic day for the commander of the 3rd Battalion.

This is Colonel Marius Lagrange’s unedited account of that day:

A little before leaving the battalion H.Q., Major Gandoet gave instructions for the personnel to split into several small groups in order to avoid being pinpointed by the German artillery, if possible, as it was shelling the area continuously, with all types of shell.

Lieutenant Jordy had been with us in the H.Q. for two days. The Major had made him come into his H.Q. as he thought he was tired and that he could leave what remained of the 11th Company, which formed a stongpoint on the south slope of hill 862, to his second in command, 2nd Lieutenant Gauzan, until the planned relief.

It was the Major who guided our descent among the rocks, helping us to avoid being picked off by the artillery on Cifalco as far as possible.

On arriving at the lower level, approximately at the foot of hill 382, we found ourselves facing an open stretch of land that was impossible to avoid as the rocks on each side were impassable.

We reacted immediately and the Major gave the order to split into two groups, saying to me: “Lagrange you follow us with your team”. The doctor, Lieutenant Jordy, Dick and Gacem came with me.

At the end of the open stretch, the drama played out before my eyes. I saw several shells explode, one of which exploded in the middle of the half-group that consisted of the Major, who was wounded in the arm and above all very shocked by the explosion (his jacket was torn). I saw Lieutenant Jordy fall on his back, killed outright by numerous pieces of shrapnel that hit him in the chest. His face was untouched. Rifleman Gacem was wounded in the stomach and leg, which were torn. However, he still had the strength to take out his packet of dressings and, realising that he was on the way out, to give it to the Major.

The other part of the group was a few metres to the left and another shell fell close by killing Chief Warrant Officer Dick and wounding the doctor.

After this dramatic event, I quickly reached a decision: they all had to be got back to the regimental H.Q. I persuaded the Major to [let me] accompany him to the track where a few vehicles passed. It wasn’t easy to get him to quit the scene and he kept looking back at “his Jordy, Gacem and Dick”. Finally, supporting him, we arrived at the track.

Before leaving the scene, I passed on the order to Corporal Brocero to take the bodies of Chief Warrant Officer Dick and of Gacem to the regimental H.Q. I informed them that I was taking care of the Major and of Lieutenant Jordy.

Once at the track, I had to make the Major wait and get him to understand that he could not get back to the regimental H.Q. without stopping a vehicle. After several attempts, a jeep stopped. It was driven by a 2nd Lieutenant of the artillery with a passenger.

The Major, completely exhausted, climbed in the back and the 2nd Lieutenant artilleryman assured me that he would drop him quickly at the H.Q. of the 4th R.T.T. at San Elia.

I went back to take Lieutenant Jordy on my back and recommence the operation of stopping a vehicle on the track.

Night had fallen and it was not easy as the vehicles were moving with dipped headlights. Finally, however, after I blocked the track by waving my arms, a half-tract [half tank, half truck] stopped and was able to take Lieutenant Jordy. The driver assured me that he would drop him at the H.Q. of the 4th R.T.T. at San Elia. Which he did.

I was tired, of course, but after I had cast my mind over the events, thinking I had sorted out this terrible situation as well as possible, I took a little time to recover before going back to the regimental H.Q. alone where I arrived at midnight, at the first-aid post.

I asked to see the Major but he was asleep.

Then I went back to the 4th R.T.T. in the Inferno Ravine.

The place where these events occurred is much closer to Olivella than to Cairo, about 150 metres from the track.

A few metres from the Major’s group was a scree slope that was supported by a low wall that had once been part of a house, long since destroyed.

It was because of the close proximity of this slope that the Major’s group had had to split in two. I can see this little patch of land in my mind’s eye and this great drama.

I went back the next day at midday with my friend Reichenbach, to see the Major. He was not fully recovered and the visit was very short. I did not see him again before his return to North Africa.

I was only a Warrant Officer and I was not in a position to know how the officers of the Battalion were feeling. However, I was constantly at the Major’s side during that difficult time, and I could see what was asked of them, especially of those leading companies, who had to work miracles every night and every day, to attack, resist, carry out missions and reach the objectives set.

Lieutenant Jordy and his 11th Company deserved a large share of the credit for the success of the operations.

Once when I had to make contact [with another section], I saw my friend, Chief Warrant Officer Tumelaire, who was responsible for the machine gun section, and he said to me: “Lieutenant Jordy is everywhere, day and night, he is at all the critical points. With him we will get to all the objectives set.”

I was friends with Colonel Gauzan, who died in 2006, who was a 2nd Lieutenant, section head, and then 2nd in command to Lieutenant Jordy with the 11th Company.

We often spoke of that time. For him, his commanding officer was an exemplar of the courage and calm that was needed in all circumstances.

He told me that he had agreed with the Major’s decision to keep Lieutenant Jordy at his H.Q., given his fatigue. I had the situation at the strongpoint that had been set up on the southern slopes of 862 under control, and it was soon to be relieved, therefore, nothing opposed the Major’s decision.